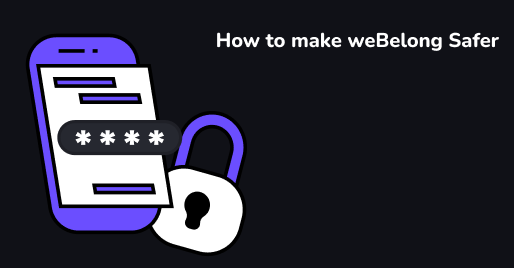 We have been trying to build a safe space for youth to connect, make their life better, and create belongings in their life.

Safety is not always perfect, no matter how social system develop, crimes are everywhere, gunshots, robbers and so on, and it is the same on social networking app.

But we are trying to make space safer so today I want to elborate what we've done and we will do near in the future.

Likewise other social media, weBelong is getting some amounts of scammers.

We have a system to detect those scammers and disable their accounts immediately (Of course it is not 100%). Those scammers tend to use VPN and different timezone from they actually are.

We developed a feature to detect returning scammers to create a new account as well as them not creating a new account once they got banned.

There are several cases on Snapchat actually. Here are only cases which get accused but there are much more hidden cases.

All of social media have those problems.

Facebook has been confronting the issues of pedofile, and they developed a technology called PhotoDNA to scan each image and flagged known child exploitative material to stop uploads of such imagery on the platform.

Twitter suspended the @MAPSupportClub account, an online forum for people who are attracted to children to discuss the issues that they face in relation to their sexual attractions.

Researchers and activists in the US say Twitter policy currently allows pedophiles the opportunity to talk and share their attraction toward minors (children) as well as depictions of nude children on their social media.

Moreover, if you go to twitter and search some of words, you can see nudes or child abuse content.

Twitter has huge amount of users that could be difficult for them to completely eliminate those sexual abuse but activists say they are actively allowing. They do at least some of actions to prevent pedophiles aside from their policy.

weBelong has been banning those paedophiles or sexual abusing content from weBelong.

Since weBelong doesn't even allow paedophiles to stay on platform, we seem like we don't allow freedom of speech. But we believe that there are huge gaps between freedom of speech and violation for human rights.

Even if paedophile is legalized, we will not change this because this is actual violation for human rights.

If users start to talk about something dangerous on weBelong, we detect those words and suspend accounts.

Of course users can send email to us if it is wrong.

weBelong unables a person who violated our policy to create a new account. This could be extreme but this is for safety.

weBelong app will be invite-only app since there are some creeps. We believe that the environment forms personality as well, and if there are creeps on social media, it is not all about criminals, it is partially because of platform as well.

So we will take actions for this. If everyone is getting invited, and everyone knows that A is invited by B, this might prevent pedophiles from acting actual crimes at least on weBelong.

Of course, we will develop AI to detect them likewise Facebook in the future.

It will be available soon.

We will keep trying to make the place safer, so if you have any opinions toward us, contact us at info@holoash.com

Thank you for reading! Hope you enjoy the app.